We love the big snowflakes!! ❄️ #dogsofinsta #snowsnowsnow #catchingsnowflakes #doggos #germanshepherd #heelermix
Merry Christmas from the peanut gallery. ❤️
Happy 2nd Birthday to the bestest girl dog! We love you, Athena!! 🥰
The pumpkins I carved on stream today 🥰
Happy 2nd Birthday, Ripley Bean!!!
Let’s throw it back to a time when they were small beans.
Sometimes, you just have to run it out with your bestie.
Pup-Supported; Panda Approved! 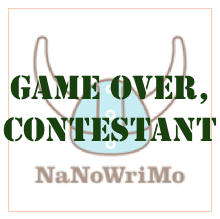 I am horrible at keeping the updates alive. I have three draft posts that were supposed to be submitted, but I forgot to schedule them. No one saw the updates or excerpts.

To help remedy this, and provide an honest update all around, I’ve summarized all of them here. Bear with me, it’s a long one. (:

Yesterday was the last day for National Novel Writing Month. Everyone kept busy trying to get another thousand words or more before the clock ran out, myself included.

It’s not horrible, but it’s also not 50K. I saw people around me hit the 50K mark and wished that I could be a part of that group too. I watched the virtual write in on youtube, and the hosts, Austin and Tim, would blow their kazoos each time someone reached their goal. It was almost salt in a wound.

I tried to reach the seemingly impossible goal last night, though I only had six hours to do it. I could feel the story slipping from my grasp, the word count wouldn’t magically jump to 50K like I wanted, and inside, part of me harbored irritation.

I wanted to feel sorry for myself. At one point, I refocused and tried to convince myself that I could include the 18K words written for Silhouettes of Red. The problem? I knew I wouldn’t be using any of it in my novel. Not to mention, I didn’t write it during NaNo. I wrote it before November.

My gut told me it was cheating, but my mind had a motive, “Win.” If I had validated with that word count, my number could have been significantly higher. I probably could have won. Not to mention, there was a kazoo waiting to sound off for me.

While I had the option within my reach, I asked myself how I honestly felt about it. For starters? I wanted to write solid material. I’ve participated in NaNoWriMo before, and quite a few of the scenes I wrote will not make it into any of my novels.

I also know that I have yet to finish any novel I start. I ended up asking myself if I wanted to go insane while repeating the same processes. I don’t think anyone wants to go insane, at least not on purpose. But I could already feel the pull towards crazy.

I realized that if I were to take the route of adding in all those pesky extra words, then my outcome of Silhouettes of Red might be a bit different. What do I mean by that? Let’s take a look at my history… Shall we?

• History Lesson #1: 3636 D (November NaNo 2014)
I created this novel based on a dream that I used to have growing up. I was very excited to write it and finished NaNo with a little over 95K. After NaNo, I let my novel sit, unfinished, from December until March.

During that time, I sent pieces out to friends/readers. I choose to read through part of it myself and hated the beginning. I could hardly push forward. Constructive criticism was given, but negative feedback took the majority. Instead of revisiting a somewhat let down, I started creating a new novel for Camp in April.

• History Lesson #2: Dawn of Affliction (April Camp NaNo 2015)
This time around, I wrote a compilation novel in the Harlow Series that includes nine short stories from a cursed town nestled in the mountains. I wrote and found a tenth, novel-worthy, idea in the process of a character named Iris. She was persistent wanted her story told and demanded more than a short, so I started the journey.

When I shared her partial story with friends, they didn’t find her so appealing. The level of detail was overpowering to some, while others wanted more. Some people claimed they couldn’t follow the plot. I was told that I struggled with consistency and that my novel needed some serious work.

• History Lesson #3: Open Deception (July Camp NaNo 2015)
July’s Camp NaNo came around, and I was pumped. For some reason, I had renewed energy to work on 3636 D. With the excitement fresh and raw, I dove headfirst into revamping and revising everything. The title was changed (to Open Deception), the perspective shifted from third to first person and that shift transformed the plot. With a little over ten chapters, I managed to adjust parts of my “waste” NaNo project at the beginning of a new novel.

Here’s the thing, I still haven’t finished it. In fact, after my own version of revision for Camp NaNo, I put it aside.

What have I learned from all of this?

• First – I need to stop listening to people when they shoot my novels down. I realized that not everyone is going to be a fan of my writing, my ideas, or the characters, and that’s okay!

A lot of people were irritated with Silhouettes of Red. They didn’t understand why I wanted to write about a serial killer. While my novel is a minority to the crowds, I find it fascinating. The mind of Edgar Bates has yet to bore me. Personally? I enjoy Edgar’s creativity and duplicity.

• Second – NaNo gives me permission to use a lot of junk words. The mindset switches from “quality content” to “word count” and while it’s not always a bad thing, it often causes me stress. I lose the vision for my novel as I try to force myself to complete the word count for the day.

It makes the writing portion for me not fun. People definitely noticed that my enthusiasm for writing was different this month. On numerous occasions, I was asked what was up. People know that I love writing. But somewhere in this fiasco I lost the excitement of writing the story and started focusing on the word count instead.

With that, I ended up frustrated. My family was traveling, I ended up sick, I had to complete deadlines with work because of the trip, etc. When you lose the enthusiasm for a novel, it becomes a chore to finish. NaNo only helped enhance the nature of the “chore” mindset causing me to get discouraged easily.

• Third – Every NaNo project has been scrapped or pushed off to the side. It’s almost as if that word count focus takes over. I tend to tell myself that I’ve “reached my word count” so the story is over. Clearly, in my situation, that’s not the case.

I refuse to let this continue. Silhouettes of Red will not fall victim to the NaNo habit. I made a commitment to finish Silhouettes of Red, so that’s what I’m going to do. I was purposeful in my dedication and the words I placed in it. I want to finish the novel. While the 50K was necessary to me, it’s not the ultimate goal. Completing the story is, however, and whether it’s 100K, 79K or 50K, I’m going to push myself to do it.

I love NaNoWriMo! I like what it stands for, I am grateful for the push they gave me to strive for the overwhelming and I support it one hundred percent. I’m sure I’ll continue participating, even.

For me, personally? I need to get to the point where I can stay confident, focused and determined in what I’m writing while doing whatever challenge it is that I feel compelled to do.

Throughout all of this, I’ve learned more about me. I accepted a new adventure, I completed it in the past, and I have failed at the challenge in the present. I set goals for myself and achieved them, and throughout each time, I’ve gained experience as well as practice in regards to writing.

I’ve realized that it was easy to learn success. It’s effortless to celebrate and be enthused with the knowledge that you’ve accomplished something.

It’s harder to accept failure. I’d like to think that this is my journey. I’ve just found something that didn’t work for me. I hope that maybe the ten thousandth time, I figure out how to make my own lightbulb.

The only way that I can manage that is if I choose to keep pressing forward. I’m going to keep writing, I’m going to finish Silhouettes of Red, and I’m going to be a success story. (;

Okay, there you have it. My update on NaNoWriMo. As you can see, I learned a lot about me and my process. I don’t see this as a fail, I see this as a partial success. (: I learned something that didn’t work for me.

I have two more, but I’ll post those later this week.

Hai hai, I'm Shay, but many people call me Panda! I'm a writer, movie-lover, dog mom, and streamer. I'm obsessed with pandas, scary things, beanies + hoodies. My super power is sarcasm and I'm learning how to be unapologetically me. Welcome in. View all posts by Shay